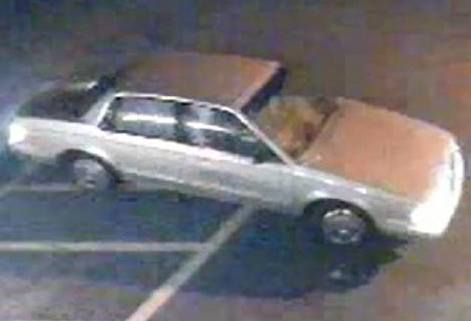 Winslow Township police are searching for a man accused of committing a burglary at a local business.

According to authorities, the business that was burglarized is located on Williamstown Road in the Tansboro section of Winslow, NJ. The break-in reportedly occurred around 11:00 a.m. on September 29.

Winslow Township NJ police arrived at the scene a short time after the theft incident to conduct an investigation. Police officers later found video surveillance footage that allegedly shows the suspect in the process of committing the burglary.

Now Winslow police have released surveillance photos of the suspect committing the break-in. The photos reportedly show the suspect wearing a white shirt and hat as he steals various merchandise and items from the business.

Investigators were also able to obtain an image of the suspect’s car. However, police have not yet released that image to the public.

If Winslow Township detectives can eventually identify and locate the suspect, he would likely be subject to serious criminal charges for burglary and theft of movable property. As set forth by N.J.S.A. 2C: 2C:18-2, anyone who unlawfully enters a structure without permission can be charged with a third degree crime. A conviction for third degree burglary could lead to a sentence of 3-5 years in NJ State Prison.

Law enforcement is asking for the public’s assistance with the investigation. Anyone with information about the suspect or the alleged burglary should contact the Winslow Township Criminal Investigation Unit at 609-567-0700.

For more information about this case, check out the NJ.com article entitled “Have You Seen This Man? Police Seek Info on N.J. Burglar.”