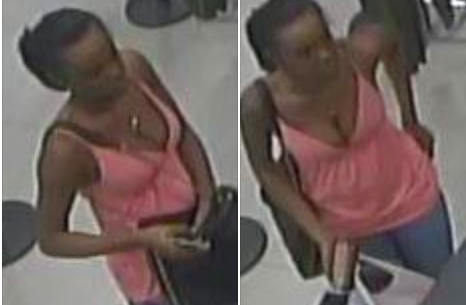 Cherry Hill NJ police are asking for the public’s help in determining the identity of a woman who allegedly used a stolen credit card.

According to law enforcement, the suspect walked into the Footlocker at the Cherry Hill Mall and used a stolen credit card to buy almost $200 worth of items.

After completing the purchase, the suspect reportedly left the store and exited the mall.

The incident happened in early August. Afterwards, store employees contacted local police to notify them of the fraud.

The Cherry Hill Township Police Department is actively investigating the theft and fraud incident. Police recently released images of the suspect that were taken by store surveillance cameras. The images show the suspect allegedly using the stolen credit card inside the store.

If police are eventually able to identify and locate the suspect, she would likely face charges for credit card theft and credit card fraud, both of which carry severe penalties. As set forth by N.J.S.A. 2C:21-6(c), anyone who takes or obtains a credit card without the cardholder’s consent can be charged with a fourth degree crime. A conviction on fourth degree credit card theft charges could result in a sentence of up to 18 months in NJ State Prison.

Cherry Hill police have asked members of the public who have information about the suspect or the alleged fraud to contact detectives at 856-432-8827.